A second public exhibition is being held at the end of next week by Berkeley Homes/St Edward to show how their plans have evolved for the redevelopment of the Homebase and Tesco sites since the first exhibition in Oct 2019.

It will be very interesting to see how the plans have changed given all the negative feedback from local residents to the plans shown at the first exhibition.  Will we still see 16-storey blocks, or will the developer have seen sense and come up with some reasonable proposals that respect the character of the area and  are not excessive in height, massing and density?

Here are the exhibition details (see also the flyer from the developer):

Thereafter, the consultation centre will be open again in the Tesco Extra Osterley car park from Tuesday 3 March, on Tuesday evenings 4-7pm, and Saturday mornings 9am-12pm.  So if you can’t make the exhibition dates, you still have an opportunity to see the plans.

We anticipate that the planning applications will be submitted in mid-2020, when we will be expected to respond in planning terms.

This is the biggest development in our area for years and will affect us all.  Apart from concerns about the size of the development, we need to ask about the following aspects at the exhibition:

We strongly encourage you to go to one of these exhibitions, see the proposals, ask pertinent questions, and provide your feedback to the developer (and to OWGRA by e-mailing info@owgra.org.uk).

St Edwards Flyer (should have been distributed in the catchment area) 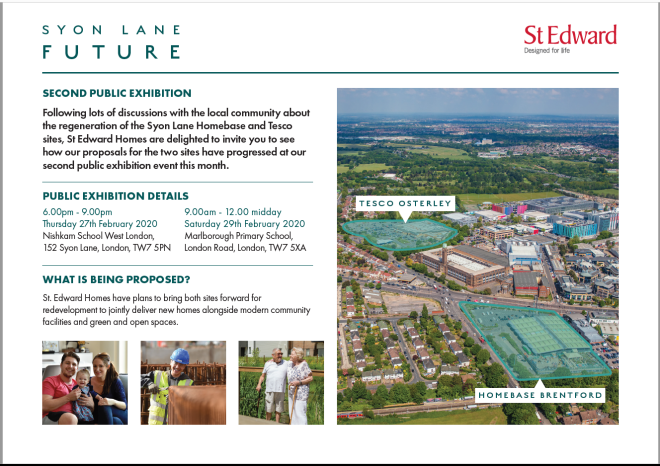 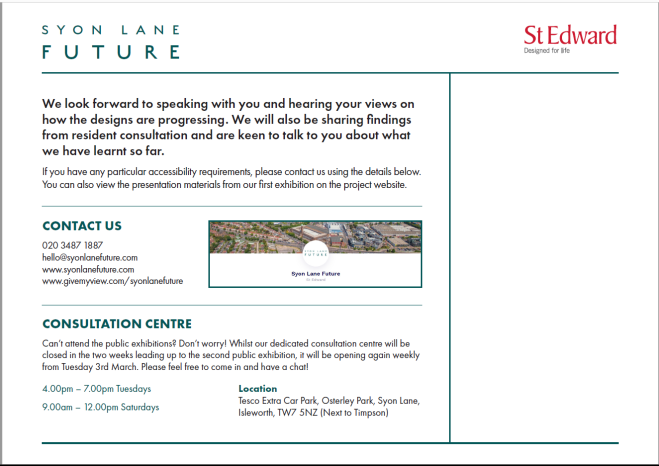 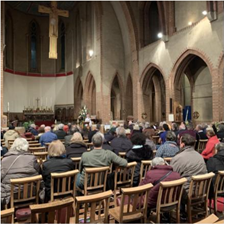 An update on the proposed developments on the Tesco and Homebase sites in Osterley was given to the local community on Wed 20 Nov at a public meeting in St Francis of Assisi Church, organised by OWGRA (Osterley & Wyke Green Residents’ Association) and Mayor of Hounslow and local Ward Councillor, Tony Louki.  Over 100 people attended, showing the level of interest and concern locally.  The developer was not invited to the meeting.

Councillor Louki gave the background to the development and stated that the proposed number of residential units was vastly greater that in Hounslow’s Local Plan.

[The Local Plan gives a “Minimum Development Quantum” (MDQ) for potential development sites. Stating only a minimum could be seen as an invitation to developers to reach for the sky without regard for the character of the area. On the other hand, it could be seen as a level of development which would not be rejected by the Council as an “underdevelopment”. The developer is proposing 500 units for Homebase which is 47% higher than the acceptable minimum of 340 in the Local Plan. It is proposing 1650 units for the Tesco site which is 370% higher than the acceptable minimum for that site of 350 units.  The Local Plan site allocation for Tesco has an additional MDQ for 780sqm ‘large format’ retail space, which is not in Berkeley Homes proposals so far for the 4.6ha site.]

Local resident and OWGRA Committee member, David Pavett, told the meeting about the 5-year Campion Concerns campaign which started off with the developer proposing 340 flats (on the site of the old seminary on Thornbury Road) and ended up as 82 homes (mainly town houses).  This was due to the hard work of a group of local residents who worked tirelessly over five years for a development that respected the character of the area.

Another OWGRA member, Barbara Stryjak, talked about the experience with the new Nishkam School, and that local residents were working with the School and the Council to reduce the large number of cars coming into the area to drop-off and pick-up children (at least 3 times higher than stated in the planning application).  Traffic concerns will be a major issue for the proposed Tesco and Homebase developments.  She went on to mention some success in working with Access Storage to reduce the size of their proposed development at the site of the former Shell garage at Gillette Corner from 14-storeys to a maximum of 6-storeys, and good co-operation with Brentford Football Club to redevelop their Training Ground on Jersey Road to the west of Osterley Park. 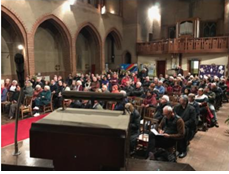 Apart from traffic and inadequate public transport, the key concerns from residents are height, massing and density, and the provision of genuinely family-sized homes, plus lack of infrastructure.  Two local residents gave examples of long waits for ambulances and in A&E at West Middlesex Hospital and bed shortages.  After the meeting another local resident mentioned that the waiting list to sign up her young children for swimming lessons at the nearest public swimming pool (in Isleworth, over 1.5 miles away) was 300 children, or 18-24 months!  She also has to queue during holiday times for her children to use the swings in the local park!  The view in the community is that the Council is forging ahead with developments but not giving adequate thought to infrastructure.

It is expected that the planning applications for both sites will be submitted in late spring 2020 and go to Planning Committee in autumn 2020.