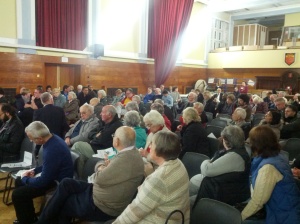 The public meeting held on 28th February was another success with around 100 people attending. The topic was Transport, Traffic, Parking, Roads and Pavements. You can read a detailed report of the meeting HERE. It includes the questions put by residents to the speakers. We have been promised written replies to those questions by both speakers and when we receive them we will add them to the report.

The picture shown here is of the meeting during the question and answer session. Residents were keen to put their questions to the speakers.

Gareth James explained the Council’s approach to dealing with traffic and how it works with Transport for London and the new London Mayor’s transport strategy. He dealt with often contested issues such as Controlled Parking Zones, 20 mph zones and school travel plans. He said that he wanted residents’ feedback and that all correspondence would receive a response.

Tim Hurley explained that Hounslow’s streets and pavements were maintained by a private company under a 30-year Private Fund Initiative contract that still has 25 years to run. He gave details on the enormous scale of the task (186 km of roads, 822 footways, over 15,000 street lights). Hounslow Highways quality control was explained along with the triggers it uses for determining the urgency of work to be done.

The presentations were followed by a question and answer session in which it was clear that residents were not short of issues they wished to raise.

You can see the presentation slides used by the two speakers. Gareth James’ slides are HERE and those used by Tim Hurley are HERE (PowerPoint version) or HERE (pdf version).