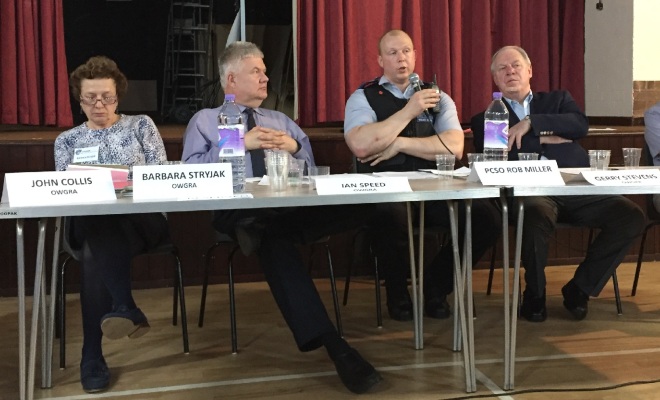 OWGRA held its AGM for 2017 on Tuesday 23rd May in the St Francis Church Hall on the A4 (near Gillette Corner).

After opening the proceedings, a minute’s silence was observed in memory of the people killed in the Manchester bombing the previous day.

OWGRA’s Vice-Chairman, Gerry Stevens, delivered the Chairman’s report of OWGRA’s activities over the past year. He explained that the committee elected in May 2016 had worked hard to re-vitalise the Association and to raise its profile. To that end it had published and distributed four newsletters to 5000 homes, created a contact list of 350 residents who receive regular email updates on local news, set up an informative website, and held well-attended public meetings. The three public meetings held attracted from 70 to 130 people. You can hear Gerry’s full report by clicking on the link below

The new committee elected at the AGM is as follows

Thanks are due to the retiring officers Brij Rathor (past Chairman) and Colin Bell (past Planning Officer) who did so much to help the Association raise its level of activity.

There was a refreshment break after which the meeting on crime and anti-social behaviour was opened with a presentation by PCSO Miller, followed by a question and answer session. Residents raised many issues including known areas used for fly-tipping, drug dealing, prostitution, car racing during the early hours, traveller incursions as well as poor communication between the police and residents. PCSO Miller answered many questions and where he was unable to do so he said that he would pursue the issues after the meeting.  He also stressed the importance of reporting crime or suspicious behaviour by calling 999 (emergency) or 101 (non-emergency).

After the meeting OWGRA Secretary Barbara Stryjak said: “This is the third in the series of public meetings organised since a new committee was elected in May 2016.  Attendance has ranged from 70 to 130, which is very satisfactory. The Association has received many comments, letters and emails from residents praising the its work. We are very pleased with the interest shown. We have signed up 250 members and aim to get this up to 500 in the course of the coming year”.

Gerry Stevens added: “We will be following up on the issues raised and reporting back to residents. We are grateful for their suggestions”.

OWGRA’s next planned meeting will be on Heathrow Expansion in the autumn and Recycling/Litter/Fly-tipping in the winter.

Some of our recent activities (previous home pages)

These reports contain written accounts, photographs and recordings of the talks given.