OWGRA held a public meeting to debate the expansion of Heathrow with a third runway on 10th October. The meeting, had speakers for and against expansion, was attended by over 80 residents.

The purpose of the meeting was to give residents a chance to hear well prepared cases both for and against Heathrow expansion so that they could understand both points of view.

This is an issue which excites strong feelings but what we wanted was a calm discussion in which people listened carefully to what was said even when they disagreed.

Rob Gray, Director of Community and Stakeholder Engagement for Heathrow Airport Ltd, explained why he thought that the third runway would be a good thing. You can hear his contribution here:

John Stewart, Chairman of the Heathow Association for the Control of Aircraft Noise, made the case against the third runway. You can hear his contribution here:

The atmosphere of the meeting was one of engaged but reasoned discussion. Both speakers were listened to quietly and after a refreshment break a Q&A session was held in which questions were put to both speakers. You can hear the session here: 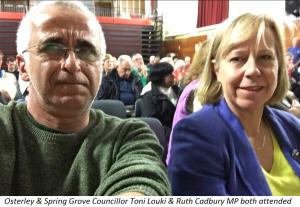 At the end of the Q&A session the chairman asked the OWGRA members present to vote on support or opposition to a third runway. The meeting was overwhelmingly against the runway. The same result was obtained when the whole meeting voted (OWGRA members + non-members). The same result was found in the 55 survey forms returned at the end of the meeting. A small number of those present were undecided and we hope that the meeting will have helped them them to find their way round the issues.