Nine volunteers (6 from OWGRA, 1 from Heston Action Group, 1 from Isleworth, and Councillor Tony Louki) spent about 1.5 hrs clearing the litter on Saturday morning 2 March along Windmill Lane between the Seccombe roundabout at the Jersey Road/Syon Lane junction and the M4 underpass. They filled 35 green Hounslow Highways bags. Found among other things: 3 sets of registration plates and a set of VW keys!

Many thanks to the Hare & Hounds which kindly provided much deserved refreshments afterwards. A good morning’s work. Thanks to all our volunteers, job well done! 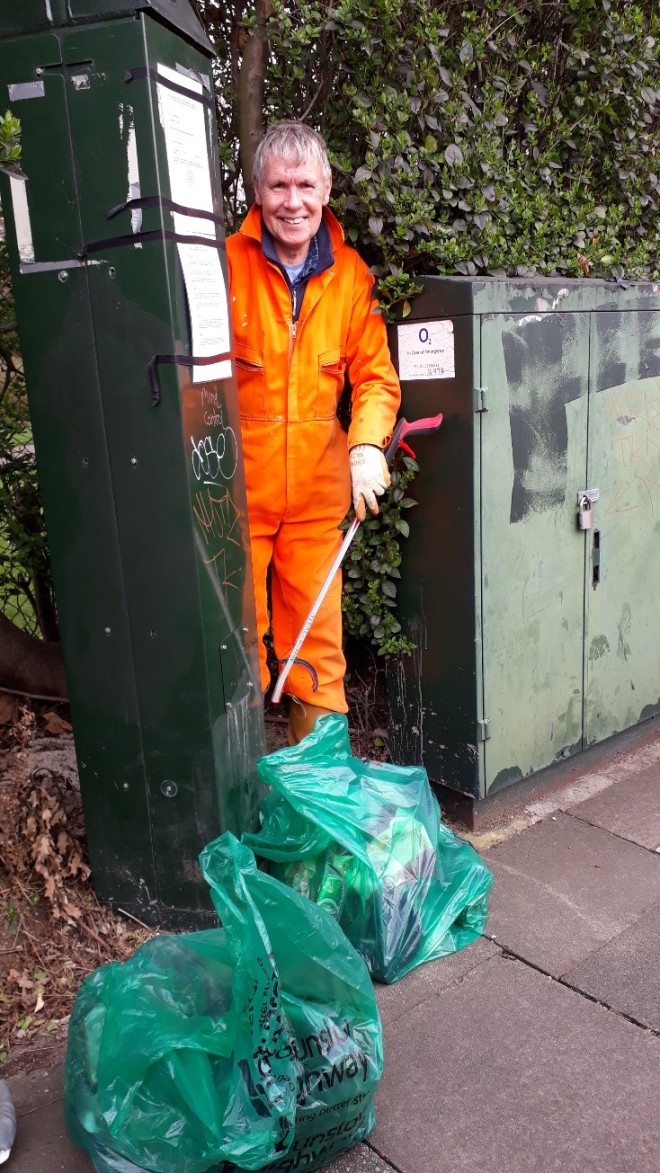 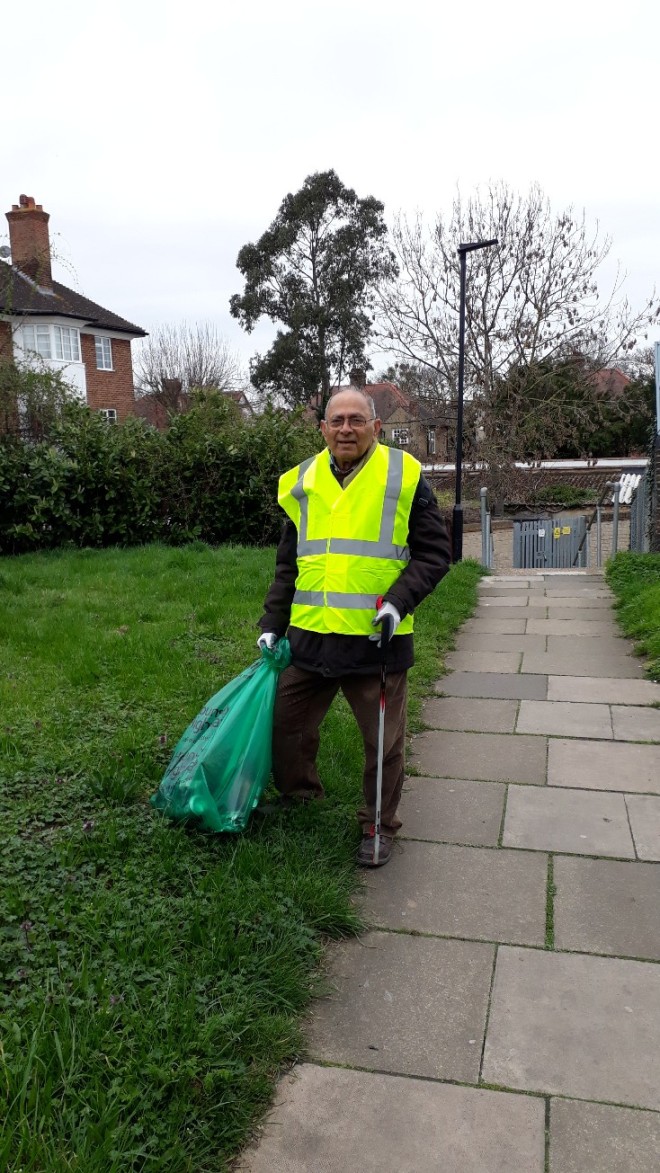 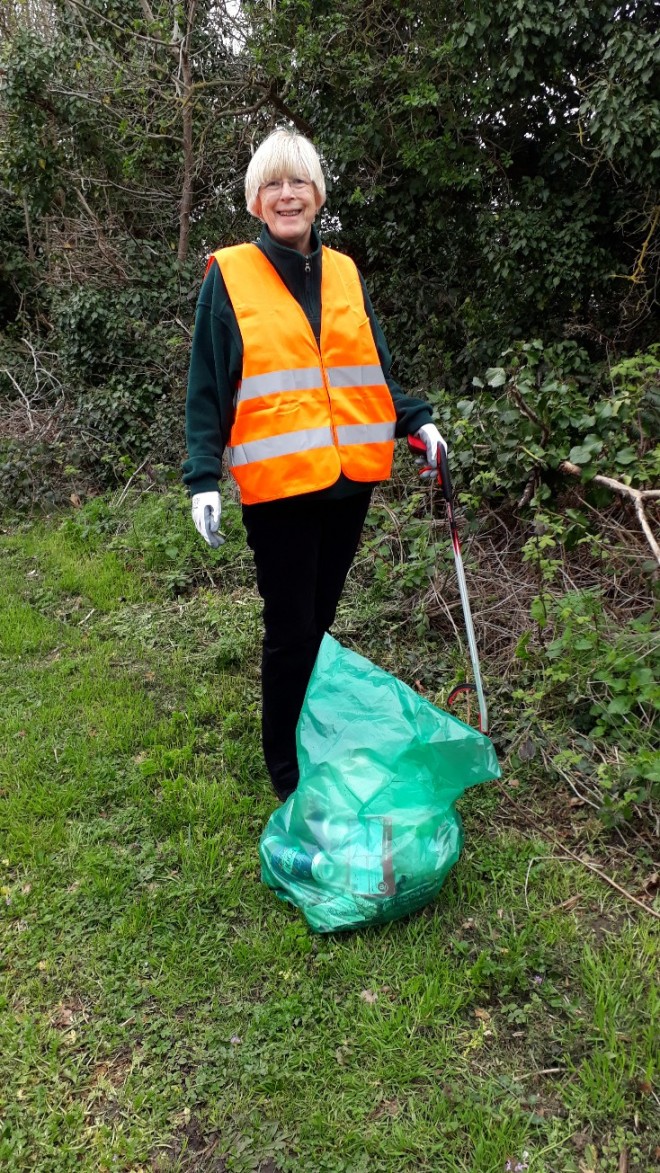 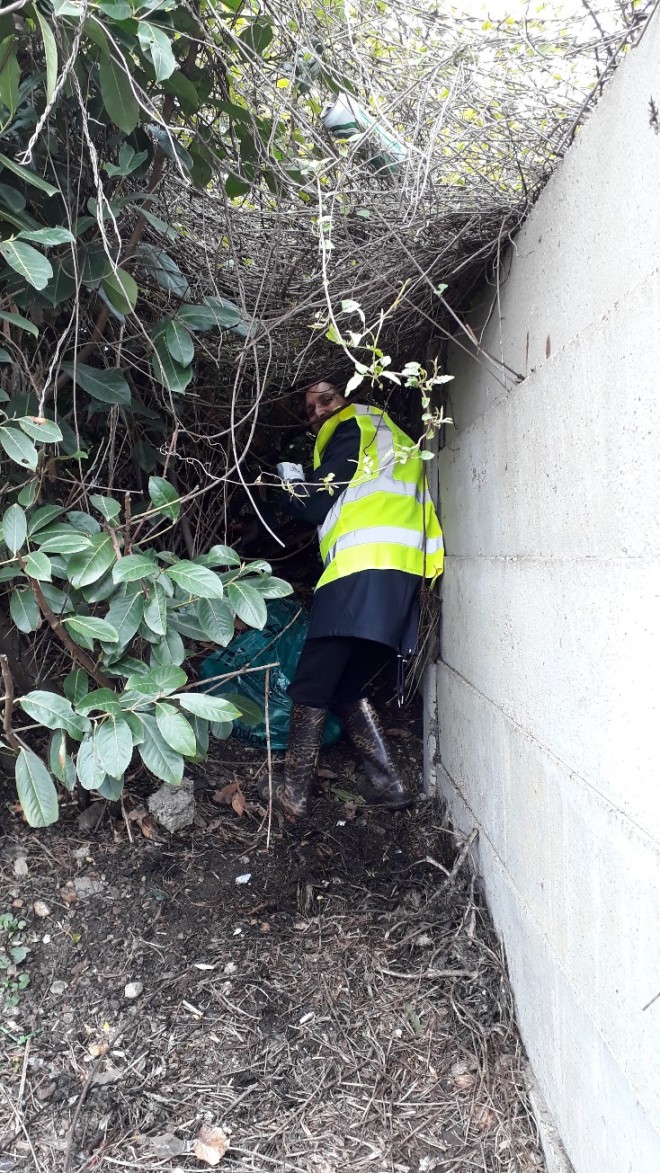 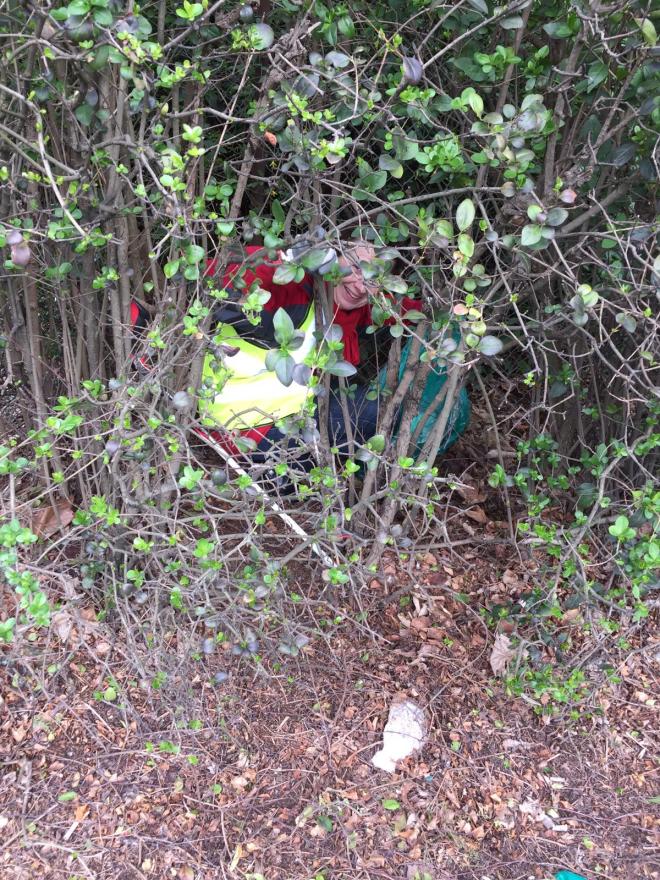 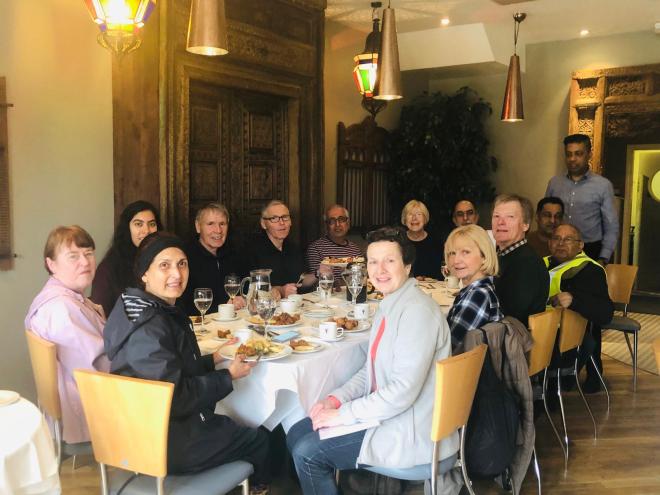 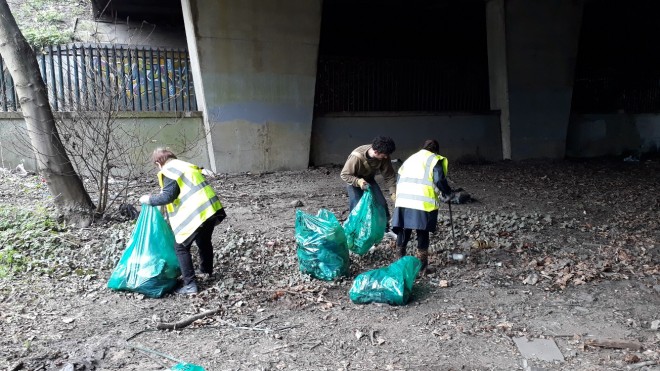 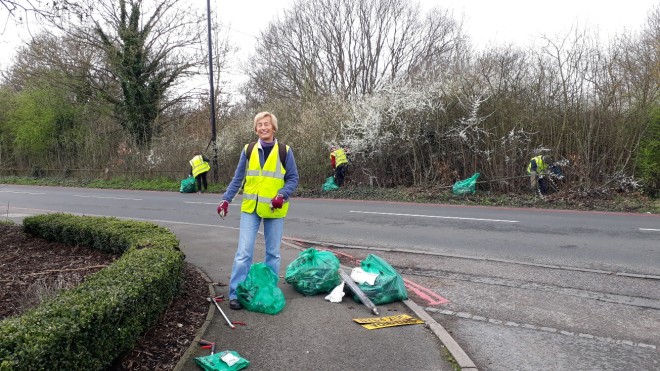 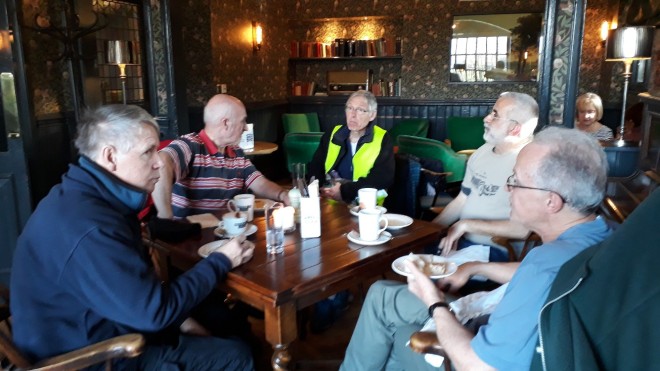 OWGRA Community Litter Pickers (10 of them plus 2 from HAG and Councillor Unsa Chaudri) were out again today clearing litter, including the area around Osterley Station, the footpath from the A4 to Bassett Gardens, also Penwerris Avenue, Jersey Road (west) and Jersey Gardens.

There was some scrabbling through bushes and undergrowth to get to litter which has been there for years.

Thank you to Memories of India for providing refreshments for the hard workers afterwards, much appreciated. 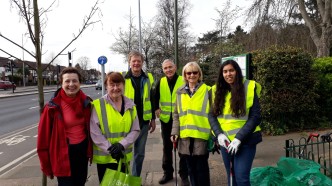 11 lovely volunteer litter pickers headed back to Windmill Lane in Osterley today to continue clearing the litter that filthy people throw from their cars. The M4 underpass was the most challenging, and we need to go back to finish the job there despite filling another 35 bin bags.
The usual suspects were found including vehicle registration plates and plenty of large plastic bottles full of cider and other suspicious-looking yellow liquids.
Thank you to Wyevale Garden Centre in Osterley for providing refreshments for the hard workers afterwards, much appreciated.
Next OWGRA Community Litter Pick, Sat 23 March, 10.15 am, meet at Osterley tube station. We hope to see you there! 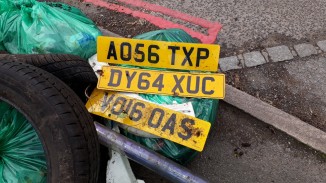 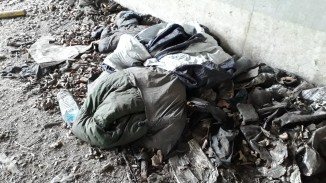 Nine volunteers (6 from OWGRA, 1 from Heston Action Group, 1 from Isleworth, and Councillor Tony Louki) spent about 1.5 hrs clearing the litter on Saturday morning 2 March along Windmill Lane between the Seccombe roundabout at the Jersey Road/Syon Lane junction and the M4 underpass.  They filled 35 green Hounslow Highways bags.  Found among other things: 3 sets of registration plates and a set of VW keys!

Many thanks to the Hare & Hounds which kindly provided much deserved refreshments afterwards.  A good morning’s work.  Thanks to all our volunteers, job well done! 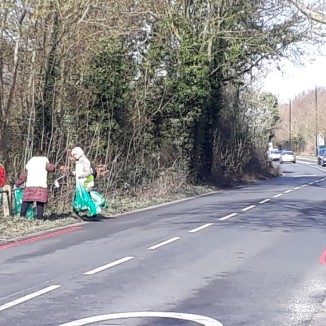 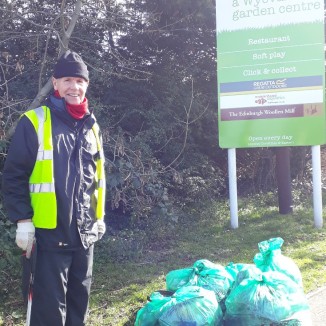 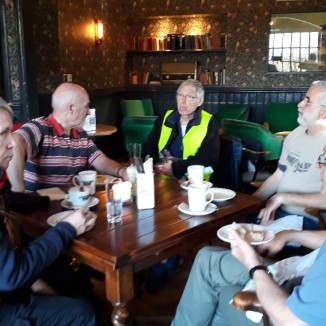 Access Storage (the owners of this site) are proposing to construct a significant building on this site housing self-storage units and offices for this site.

This is for a storage facility owned and run by Access Storage, which will consist of rentable storage and office space, housed in a 4- to 6-storey building.

They then presented their plans to Councillors on 20 September 2018. We attended this meeting but were only able to submit questions via councillors – which we did. This was a “pre-application presentation” to Hounslow Council’s Planning Committee, seeking guidance from the Committee as to how to structure their proposals to meet the committee’s expectations. The developer emphasised that they were listening to the views of local residents and confirmed they had received representations from OWGRA and BCC and were incorporating their feedback into their proposals. Their latest proposals did indeed include responses to some of the concerns that have been raised. Further comments were made by the committee and the developer confirmed they will incorporate responses to those and the comments from OWGRA and BCC in an updated proposal.

A public meeting was then held by the developers on 4 December, 2018 at which they presented their latest plans and took questions from local residents.  The developers explained the reasoning behind the revised design for the proposed building (which will be part a storage facility and part offices) and the transport implications were the application to be approved. It was good to see that a number of changes reflecting comments from both OWGRA and Councillors have been incorporated. Around 40 people attended the meeting which was chaired by Councillor Tony Louki.  After the presentations there was a Q&A session which clarified some issues and highlighted others as needing further discussion.  The planning application is expected to be submitted soon, so we will be going through it in great detail, and sending you a draft response.  If you would like to help us with this in any way, please let us know.

This proposal to replace the current 2-storey office & warehouse on the site with a combined office/warehouse and residential flats development of 5 storeys is still ongoing.

We presented our objections (here) on behalf of local residents to this proposal at the Planning Committee meeting on 2 Aug 2018, as we feel it is inappropriate for the area and will adversely impact on nearby residents. The Councillors on the Committee asked pertinent questions and made very relevant and sometimes tough comments about the applications. It was clear that the Councillors were prepared to listen to alternative views and concerns raised by local residents. Both applications were ultimately rejected by the Committee, the reasons being as below.

In December 2018 the applicant submitted an appeal against the refusal of the Planning Application for the Flats. We have submitted our objections to this to the Inspector who will adjudicate this appeal. Given the backlog in the Inspectorate, this may take 6-9 months before we hear what the decision is.

This application to develop a Shisha Lounge has also been a long-running application. Following its earlier deferral it was considered at the Planning Committee meeting on 2 Aug 2018. We had spoken against it when it was previously considered, and a decision made to defer it for later consideration. Our arguments were carried forward to this meeting, and this application was discussed extensively by the Committee, with some considerable concerns being raised about having a Shisha lounge at such a location (in a residential area close to a major school). The application was eventually rejected, with the reasons being

In Sep 2018 they submitted a new application. This was more than a little similar to the rejected Shisha Lounge application, except that this time it was to make the same structural changes as had been proposed in the Shisha Lounge application, but with no mention as to the use the revised structure would be put to. The proposals would impact the existing versatile, multi-use Conservatory (which for many years was a successful restaurant, and has more recently been used as a meeting room, banqueting area and exhibition area). It would remove the walls on 3 sides, remove part of the roof and detach it from the rest of the building. We objected to this based on the impact on this locally listed building and the application was rejected by the council.

In Jan 2019 they have now appealed this rejection.

We established contact with them and held a meeting with them at the grounds on Jersey Road on 1 Oct 2018. We attended together with some local residents. They presented their plans and then held a Q&A session at which a number of points were raised about their plans, which they took on board.

Based on this meeting we then submitted a number of comments to them regarding their proposals which they took on board.

They submitted their formal Planning Application to the Council at the beginning of January 2019 and we are now finalising our response to this.

This proposed development of a 6-storey office block behind the Gillette Building was approved by the Council at their Planning meeting in mid Oct 2018 despite objections from OWGRA and BCC. Our objections were due to our concerns about the building intruding on the views of the Gillette Building, which is a Grade II listed building. The Council felt this would not damage the views and we very much hope they are right.

We have been working with local residents, and submitting objections, to the proposals by developers to build a block of flats at the far end of Oakley Close backing onto Burlington Road.  The Council refused the latest application. The applicant then appealed against this latest refusal, and this appeal was then dismissed in Nov 2018.

We attended an exhibition in Dec 2018, together with a sizable number of local residents, on the proposed development of a 10-storey block of flats over the car park at Osterley station.  The boards shown at the exhibition can be seen here.  These are the comments that were made to the developer:

The developer is now meeting with local councillors for the first time in Jan 2019 to present his proposals to them.

On Saturday, 19th January, OWGRA organised a very successful Community Litter Pick. Around 20 people turned up to pick litter from the green verges along the western end of Jersey Road, bordering the Brentford FC Training ground. The area is a lovely strip of green along the road, that has been marred by thoughtless individuals fly-tipping and lots of motorists just chucking rubbish out of the window into the greenery. The green strip also seems to be functioning as an unofficial Public House judging by the volume of empty drinks bottles. Hounslow Council provided gloves, litter pickers and rubbish bags, and then sent a truck to pick up the bags after we’d filled then. Despite the area looking like it had just a scattering of litter we ended up filling over 60 sacks in the 90 minutes we all spent picking up litter. Afterwards Tesco provided free snack meals and Brentford FC opened up their Training Ground for all of us to have hot tea and coffee, enjoy Tesco’s free snacks and warm up. Many thanks to both Tesco and Brentford FC for their support of this community initiative ! We will be running further litter picks in the future – so if you know of a road/area which has a lot of rubbish scattered around let us know – provided you and some of your neighbours are prepared to come out and pick the litter with us as well 😉…

You can judge this for your self by looking at the only three images available on the developers website plus one from Councillor Louki’s website which is a higher resolution version of one of the three.

Why, we have to wonder, were more images provided from different perspectives and why are the images on the developer’s website of such poor quality?

Our partners at the Metropolitan Police Service have informed us of a new very worrying trend in the borough affecting some of our most vulnerable residents.
Some unsavoury individuals are painting or sticking markings on carriageways outside vulnerable residents’ properties.  These markings indicate to other individuals of the vulnerable person.  These vulnerable residents are unfortunately being exploited and abused physically, sexually and financially, and this mark is the ‘target’ placed for identification that there is someone here who can be exploited or abused.
One of the markings is shown in the below pictures taken from Clifden Road, Brentford.  Another marking that has been noted is of a solid circle within a diamond or square.  There are a few different markings that the Police are verifying.  As soon as they confirm they will let us know and we will in turn inform you again.
If any such markings are found, please report it to Hounslow Highways who will remove the markings as soon as possible.

For more advice on crime prevention go to https://www.met.police.uk/cp/crime-prevention/.

If you haven’t yet been to any of the Saturday markets (located opposite Isleworth Public Hall), you’ve got 2 more chances this year, on 20 October and 8 December. See details in flyer below……… 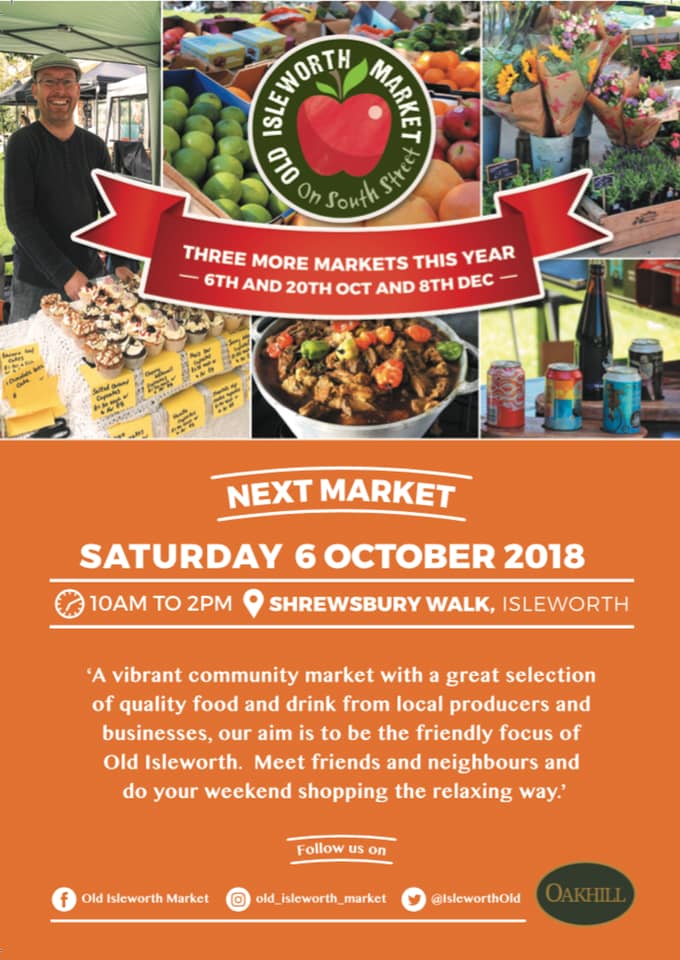 Hounslow Council have recently released a new website, the Community Information Guide. This seeks to be a directory of all Community and Voluntary organizations in the Borough. It is still being developed but even in its current state is a useful point of contact if you want to find out which voluntary organizations provide specific services in the borough. Its website address is  https://cig.hounslow.gov.uk/kb5/hounslow/community/home.page